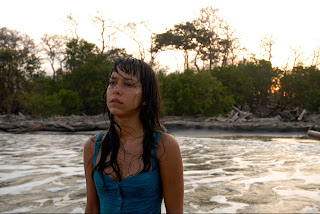 Colombia remains largely an enigma to North Americans, often represented by fleeting clichés of drug wars and guerilla violence. The real complexities of the country are rarely revealed through the nightly newscasts, let alone on celluloid.

But all that is about to change at this year’s Vancouver Latin American Film Festival, which runs Thursday (September 2) to September 12. The event features several key titles from that country’s exciting new wave of directors. The diverse offerings range from fest opener The Wind Journeys, which follows a veteran accordion player as he crosses the Caribbean region with his seemingly possessed instrument, to Crab Trap, about a conflict between remote Pacific Coast villagers and landowners who want to build a beach resort.

One of the filmmakers who most sweepingly captures the place, its people, and its complicated past is Carlos Gaviria, whose Portraits in a Sea of Lies travels from Bogotá to the lush far reaches of the country in a beat-up orange Renault 4. Along the way, the central duo, upbeat photographer Jairo and his mute cousin Marina, are faced with not only the breathtaking beauty of their country but the violence of its past and present.

“Colombia is a country with a lot of stories to tell,” the congenial director tells the Georgia Straight from Los Angeles, where he’s visiting friends. “We’ve had civil war for, well, all my life, so this is a country where more things happen in one day than for one month in Canada! And I’m amazed at the amount of stories that come out.

“It’s like there are two or three different countries inside. The north, where we go in my film, is very Caribbean; it’s much more African-American and the music is very different. In the south, the music and the culture are more Indian.”

That’s not even mentioning the visual riches of Colombia’s diverse terrain, which spans the arid cowboy ranges of Wind Journeys, the mangrove lagoons of Crab Trap, and the emerald-carpeted mountains of Gaviria’s Portraits. (Schedules for these and other movies, products of countries ranging from Brazil to Mexico, are on the VLAFF's Web site.)

Though only about a dozen films got made in Colombia in 2009, Gaviria says that is up significantly from the handful produced in previous years, when the government was less supportive. “And the amazing thing is that most of those 12 films are doing really well at festivals around the world,” points out Gaviria, whose own film was accepted at Berlin and Montreal and has nabbed awards at the Guadalajara and Cartagena festivals.

Gaviria, who received his master’s of fine art at New York University and has worked in film and TV both in the U.S. and Colombia, says making his first feature film in his home country was akin to “swimming across the Atlantic: you have to just think about getting to the other side”.

More money is available for films from the government these days, but the process is still extremely low-budget, meaning directors have to get creative. Portraits’ visual artistry belies the fact that Gaviria uses professional lights in only one scene; otherwise, he made do by putting clear plastic instead of a roof over a shanty that is a key location in the movie, and he actually opened a hole in the top of the Renault to shoot its interiors with enough light. In the remote areas where his small crew filmed, the team didn’t have electricity, using generators to charge the camera batteries each night.

When Gaviria returned to his home country from the U.S. about seven years ago, he already had a script reflecting the nostalgia he had for Colombia while living abroad. But the harsh realities of the place, the homeless surviving on the streets of his hometown of Bogotá, soon confronted him. “When you live somewhere, you think it’s the centre of the world. Then when you go someplace else for a long time and come back, you see you’re in a country that’s very different, very abnormal.”

He began interviewing people who had been displaced, tapping into the personal stories behind a massive problem that has plagued the country for decades. The United Nations estimates that more than three million people have had to abandon their homes in Colombia, forced out by guerrillas, paramilitaries, or violence, and thrown into destitution; other groups put the number higher, at 4.5 million. Colombia’s displacement is so bad it ranks alongside war-ravaged areas like Iraq and Somalia.

The result of Gaviria’s research was that he made his lead character Marina—played by Canadian-trained actor Paola Baldion (who will attend both screenings Monday and Wednesday [September 6 and 8] at the Pacific Cinémathèque)—a displaced person who is travelling with her cousin to reclaim the land taken from them by militia after a massacre.

Still, Gaviria wanted to keep the movie humanistic and, at times, funny: the wheeler-dealer Jairo staves off corrupt soldiers by taking Polaroids of them in a Mexican sombrero. “I didn’t want the film to become about the violence,” Gaviria says. “It’s my very honest feelings about my country. At the beginning, I didn’t intend to make a political movie, and I’m very surprised at how politically charged it is.”

Compelling politics, it seems, will provide more rich material as Colombia’s movie scene continues to expand. Its dedicated filmmakers will never be short of subjects—even if they are short of lights or electricity.